Andy and Kirsty met as students, more than 8 years ago, at a ball at Loughborough University.  Introduced by a mutual friend, they hit it off immediately, and began a relationship not long after.  Andy spent the following year of his degree on a work placement, while Kirsty remained on campus, but they took their final year together, before graduating and embarking into the wide world.

For Andy, this looked like a job in London, and for Kirsty, a Masters at Brunel University in West London, so they were able to remain geographically close, and a year later they moved in together. 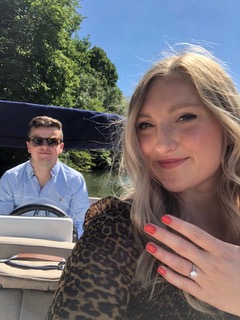 By this time, they had reached the point in their relationship where friends and family were starting to drop hints about taking the next step. So they bought a house together, 18 months ago.

The hints got louder, and Kirsty had started to show Andy pictures of rings on Pinterest. He was already thinking along those lines but just wanted to get a foot on the property ladder before getting engaged.  From Kirsty’s hints, he didn’t have to do much deciding when it came to choosing a ring style – but the stone, and its origins, were a different story.

Andy did his research, looking into high street and online retailers, and says that the more he read, the less he wanted to be part of the mined diamond industry. He learned about De Beers, the infamous diamond conglomerate, via the Ethica Diamonds website. Among other things, he discovered that the ‘rule’ about spending a month’s salary on an engagement ring, and the recent inflation to three months’ salary, is in fact a marketing ploy by De Beers. In addition, they’ve been prosecuted for running a cartel, and have been involved in price fixing and controlling the supply of mined diamonds. He became convinced that mined diamonds are not nearly as romantic as they are made to appear, and chose to walk away from that industry altogether.

However, he realised that with Ethica Diamonds he could get an alternative to a mined diamond that was of greater clarity and colour, and better cut, for substantially less, allowing for a much larger stone for his money. This appealed to Andy, so he showed Kirsty’s favourite Pinterest picture to Elaine at Ethica, and discovered that it was almost identical to the Aesa ring, a gorgeous shoulder-set oval. Andy chose to have it set in platinum, and was particularly pleased, as a Plymouth boy, to be supporting a small Cornish business, rather than a huge multinational. 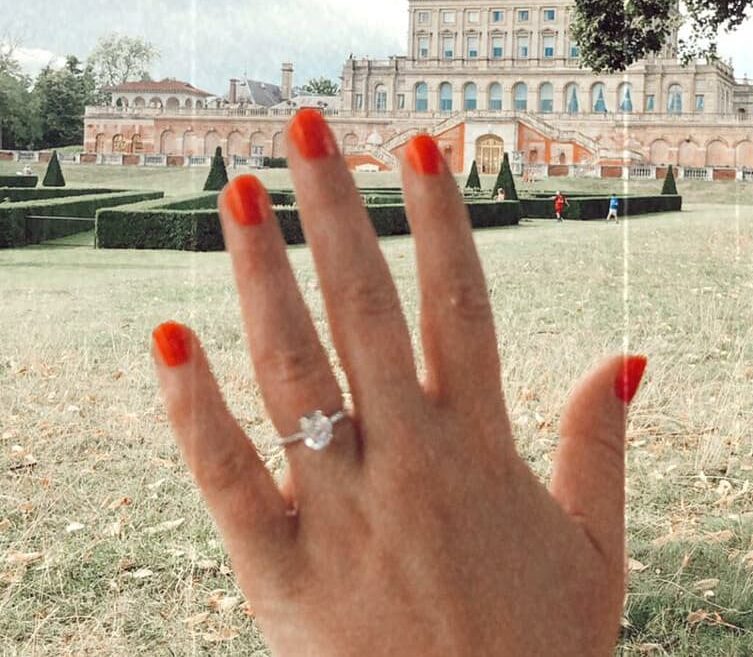 Andy’s choice for a proposal spot was slightly limited by COVID-19 restrictions on travel, but he wanted to take Kirsty somewhere that meant something to both of them.  Prevented from travelling to her home of Yorkshire, he opted instead for their local National Trust gardens at Cliveden. Their first house together had no garden, so they spent a lot of time at Cliveden, enjoying the open spaces.

Kirsty’s birthday had fallen in the height of lockdown, so he planned a ‘belated birthday celebration’ for her, involving afternoon tea at The Cliveden Dining Room, (a great reason for her to be dressed up smart) and hired a boat on the Thames. Unbeknown to her, he’d also dropped off a bottle of champagne in a cooler, the day before, which was loaded into their boat before departure. 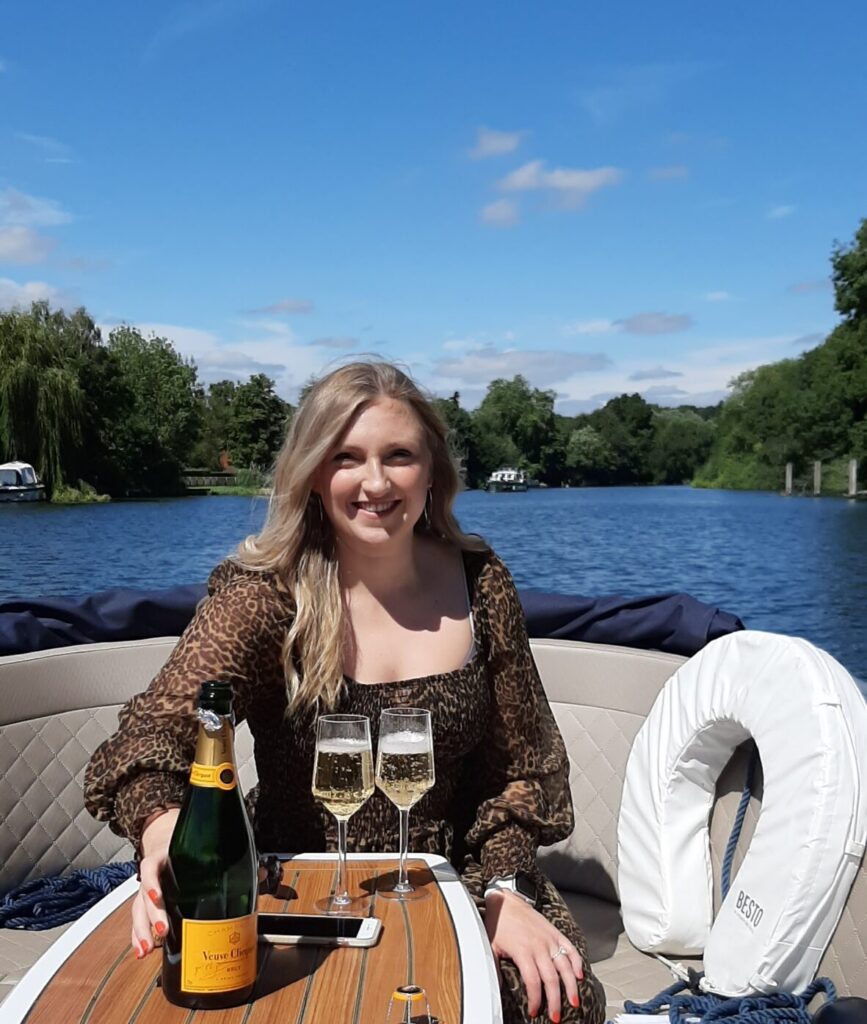 Kirsty explains that she had been expecting a pedal boat, according to Andy’s comments beforehand, so was surprised when she saw that it was an electric power boat and that they had it for two hours. She was slightly suspicious but definitely didn’t see the proposal coming!  Andy had taken the ring out of the box and just had it in his pocket, and was so nervous about losing it that he kept checking it was there. Kirsty reports “It was quite funny, as Andy attempted to get on one knee to ask me, he abandoned his post steering the boat. Once he’d given me the ring, he quickly had to get back to the wheel to steer the boat before we collided with the bank! The ring is beautiful, and I couldn’t stop looking at it sparkling in the sunshine, as it was such a lovely day. I’m also a rower so have spent a lot of time on various rivers up and down the country since I was a child so that made it feel even more special. I was glad at that point I didn’t have to do any rowing! We spent the rest of the time enjoying the champagne and lovely scenery.” 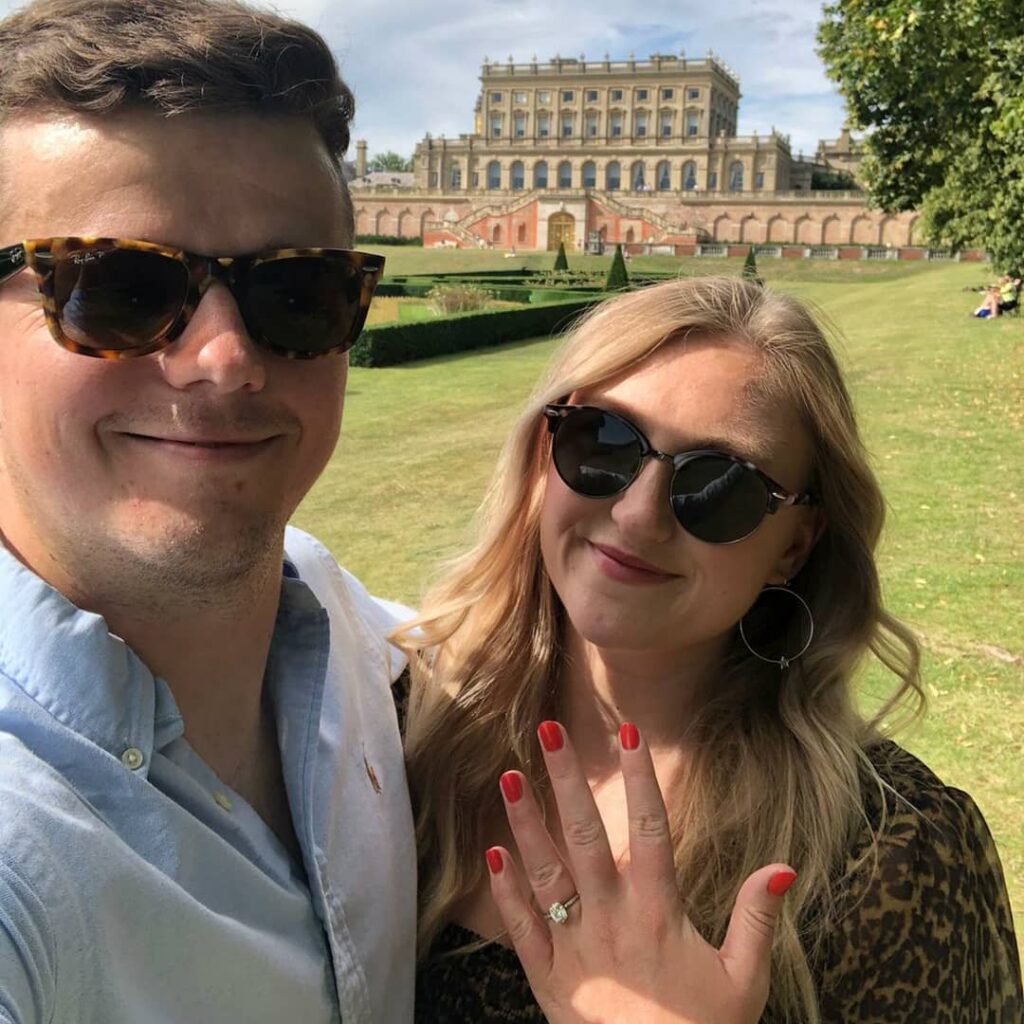 The customer service was brilliant and everyone was really helpful.  The ring is perfect and Kirsty loved it straight away.  People still comment on it when they see it and say how much it sparkles! The green hadn’t really played in my mind before as I wasn’t really aware of the impact diamond mining had although after doing some more research it became a bonus.  I’m glad it’s something I’m now aware of.  When I told Kirsty it was a lab-grown diamond she was really happy that it was a green diamond and hadn’t been mined halfway around the world.

Fast forward to 2022 and Andy and Kirsty tied the knot! They were kind enough to send us their wedding photos and I’m sure you’ll agree that the pair look absolutely beautiful, and so so happy! 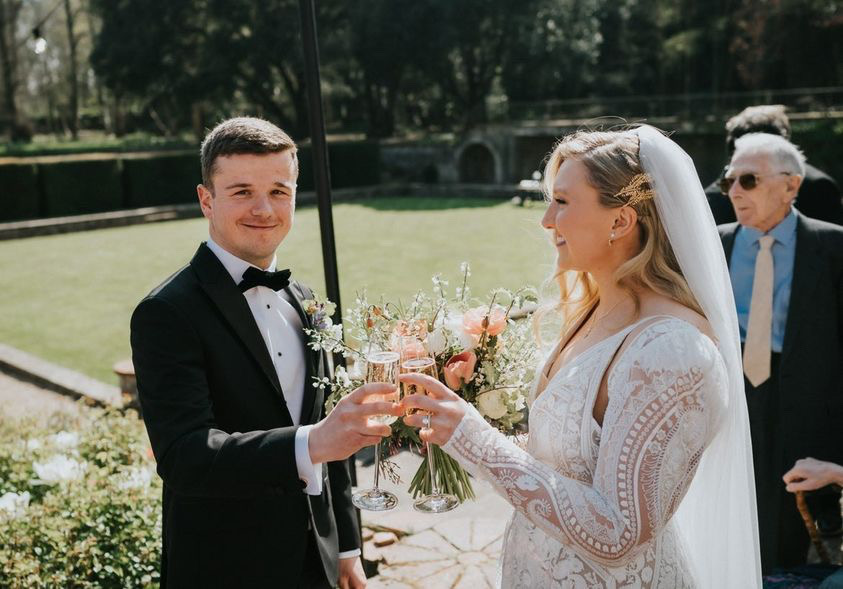