The second in our series about the ethics of the Canadian diamond mining industry.

Canadian Diamonds are marketed on their ethical, environmental and humanitarian credentials, and their marketing departments would have you believe they’re spotless in this regard.  Let’s look at the facts.

We have already looked at Diavik, Ekati and Snap Lake mines, and the environmental impact of a mine, (Are Canadian diamonds ethical part 1), so now here are some of the other mines currently existing in the Canadian wilderness.

Gahcho Kue Mine (below) Some 288 kilometres South of the Arctic Circle an area known as Gahcho Kue – ‘Place of the Big Rabbit’ in the Dene Suline language – sits in the barren grounds tundra surrounding Lake Kennady. This stark and beautiful landscape of shallow lakes and rolling ridges in Canada’s North West Territories has been significant to Indigenous Peoples for centuries. However, since 1995 – when geological surveys were first conducted around the lake – uncertainty has been mounting over the area’s future.

The discovery of kimberlite deposits or ‘pipes’ (a rock well known for containing diamonds) beneath the earth attracted mining giant De Beers and Mountain Province Diamonds Inc. to launch a bid to mine at Gahcho Kue.

Despite numerous delays – and over a decade of complications – the fears of local Indigenous Peoples’ were realised after the Canadian Government and Aboriginal Review Board gave the go ahead for extraction at the diamond mine.

Mining, wherever it occurs, raises serious questions over water quality due to the heavy reliance on toxic chemicals for extraction and processing. In the case of the Gahcho Kue mine, the potential impacts of such mine waste could be more serious. In order to access the kimberlite pipes that have been found to run beneath Lake Kennady, De Beers and Mountain Province have to drain the southern portion of the lake using a series of dykes, ditches and ponds. They claim the eight year recovery plan after the mine’s closure will minimise any damage caused during the life of the mine. Despite satisfying the relevant authorities, the two mining companies have been unable to convince critical parties that their proposal will not cause unacceptable damage to the lake and local water sources, severely impacting the ecosystem as a result.

Caribou are known to migrate in and around the mining site in both spring and autumn. Interference with this migration causes significant loss to the cultures and economies of the Dene who have lived with and relied upon the caribou for centuries.

Caribou are also important to predators whose presence is essential for maintaining the healthy balance of ecosystems. The survival of these vital animals, who are already suffering huge declines, is at least in part dependent on them having access to their natural habitat – access that the mine would disrupt.

The First Nations are equally concerned about the future health of Lake Kennady and its vital fish populations. 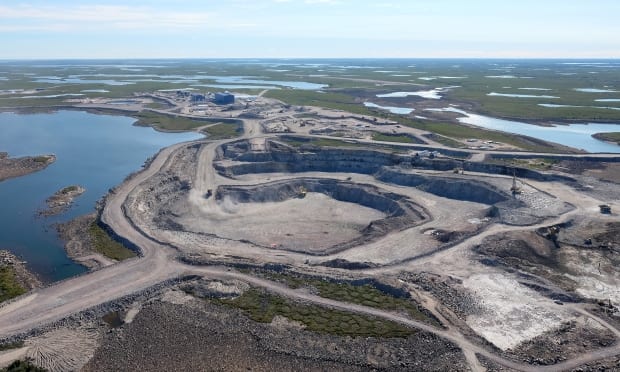 With production at the nearby Diavik and Ekati diamond mines slowing down, De Beers, Mountain Province and other interested parties look to this mammoth project at Gahcho Kue could offset any losses.

Victor Mine (below) is a De Beers operation, and the first mine in Ontario.  As an open pit mine, it’s currently producing 0.6 million carats per year, after beginning production in 2008.  It has an estimated 12 years of operational life, but because the diamonds are described as being very high quality, investigations were proposed with a view to expanding production into nearby diamond deposits.  Unfortunately, these came to nothing, and the mine will be ceasing operations in 2019. 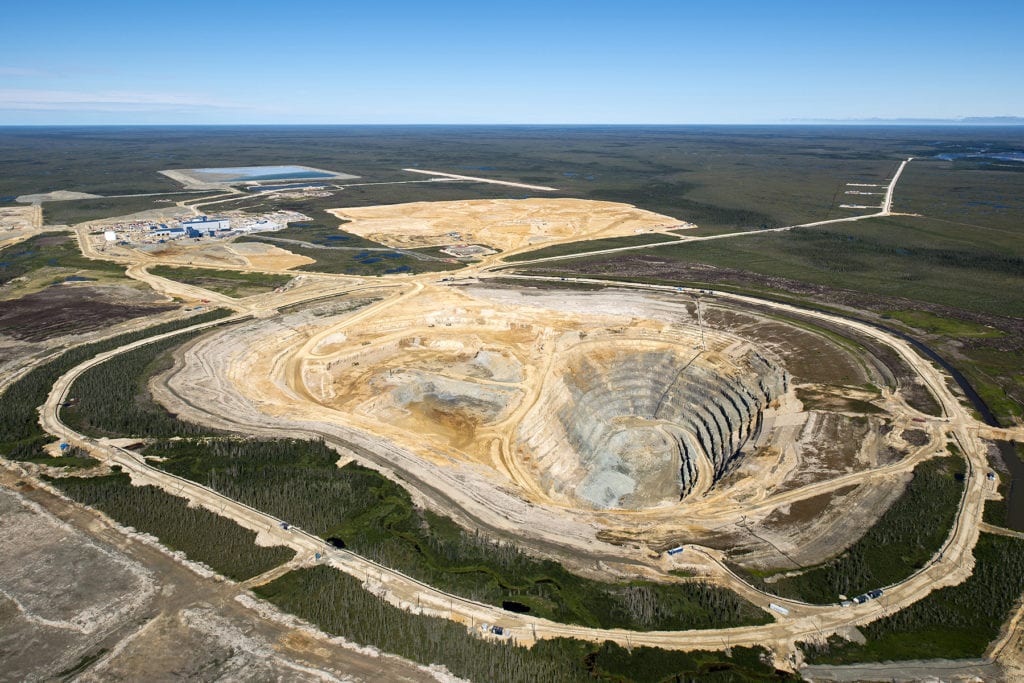 All the investigations and mining at the Victor Mine have been carried out in close communication and involvement with the Attawapiskat First Nation people, as the mine is on their land. However, after obtaining initial agreement to the mine, in the form of an Impact Benefit Agreement, (IBA), there were disagreements between DeBeers and First Nation representatives.  The allegations were that the royalties and other benefits from the mine were flowing into the Province of Ontario treasury, not towards the Attawapiskat people.  That seems to have been resolved, with $2m paid into Attawapiskat trust funds in 2015, and subsequently, but there are still issues.  In September 2016 De Beers was accused of threatening the First Nation community, trying to force their approval for the expansion project, and in February 2017 De Beers shelved the expansion project for the time being, as that approval was not forthcoming.

As recently as December 2016, a Canadian environmental group is taking De Beers to court for consistently failing to report toxic levels of methylmercury in the creeks around the Victor mine. Diamond mining does not directly deposit mercury into the creek system, but mining activity stimulates the conversion of mercury already present in the ecosystem, into methylmercury, which is a neurotoxin.  The group is alleging that the monitoring stations which report on the toxicity of the water are functioning properly up-stream from the mine, but findings from below the mine have been missing for the last 18 months.  Thus a comparison of the water before and after is unable to be made, and the impact of the mine cannot be gauged. 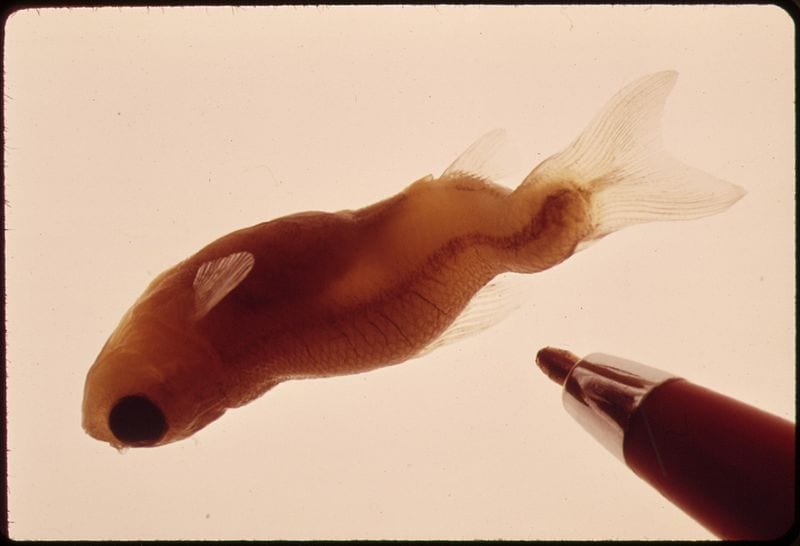 This image is a fish poisoned with methylmercury, showing a deformed spine.

Jericho Mine (below) is the only diamond mine in Canada’s Nunavut territory.  It was opened in 2006, and operated until 2008, when it was closed down, having produced 870,000 carats of diamonds.  It was purchased by another operator in 2010, and work was carried out briefly in 2012 to extract diamonds from the ore pile, but this ceased.

It’s what’s happened since the mine closed that’s interesting, with the Jericho Mine.  With all of the Canadian efforts to promote their environmentally-minded approach to diamond mining, the clean-up of an area after mining operations have been closed down presupposes that someone retains an interest in the site with the funding to undertake that clean-up. At Jericho, no-one is in place to do that.  Therefore the site has been rotting quietly since 2012.  Rubbish is scattered across the site, metal items are rusting, material is going mouldy, and the residue from it all is polluting the land, and washing into the lake.  The local Mayor is concerned that Char, which swim through the lake, will be harmed by these contaminants, and it will affect the greater food chain, including the local people.

For many years there was considerable debate about the exact status of the land, with it not meeting the criteria yet to be officially declared ‘abandoned’.  Therefore no clean-up could be undertaken, either by the government, or the Kivalliq Inuit Association which owns part of the land. There was some pressure for state funding to be set aside for emergency clean-up projects, as it’s not inconceivable that situations will arise like this in future, but this isn’t the case at present. Thus the Jericho Mine continues to rust, no remedial action is taken to restore the site to its pre-mined state, and the wildlife and ecosystem continue to be affected by its presence.

We have written a more extensive blog on what happens after mines closes, looking in particular at the Jericho mine.

Gahcho Kue (above) is a new diamond mine, opened in September 2016, in the Northwest Territory, about 280km NE of Yellowknife. The production of the mine is expected to be around 4.5 million carats annually, across a 12-year lifespan, putting it in the top ten largest diamond mines in the world.  Another mine in which De Beers have a stake, they are keen to promote the investment they have already made into the local economy via construction investment, and the predicted income locally from taxes, etc.  Local First Nation groups have signed Impact Benefit Agreements relating to the mine, and locals are optimistic that jobs lost from the closure of Snap Lake mine and a tungsten mine near by will be recouped here. However, First Nation jobs at mines tend to be broadly blue-collar, and there is some concern that white-collar jobs will not be accessible to them, trapping them in a low-income cycle.

This mine, which began production at the start of March 2017, won three industry or local business awards in a matter of months, relating to bringing the mine to production safely, under budget and ahead of time. We will follow with interest to see whether the company continues to win awards for other things, now that the mine is producing.

Come back for the final part of this series, looking at the newest operational mine, plus one that’s so new it’s not started production yet. Also, how that process works, and the traceability of diamonds from Canada.