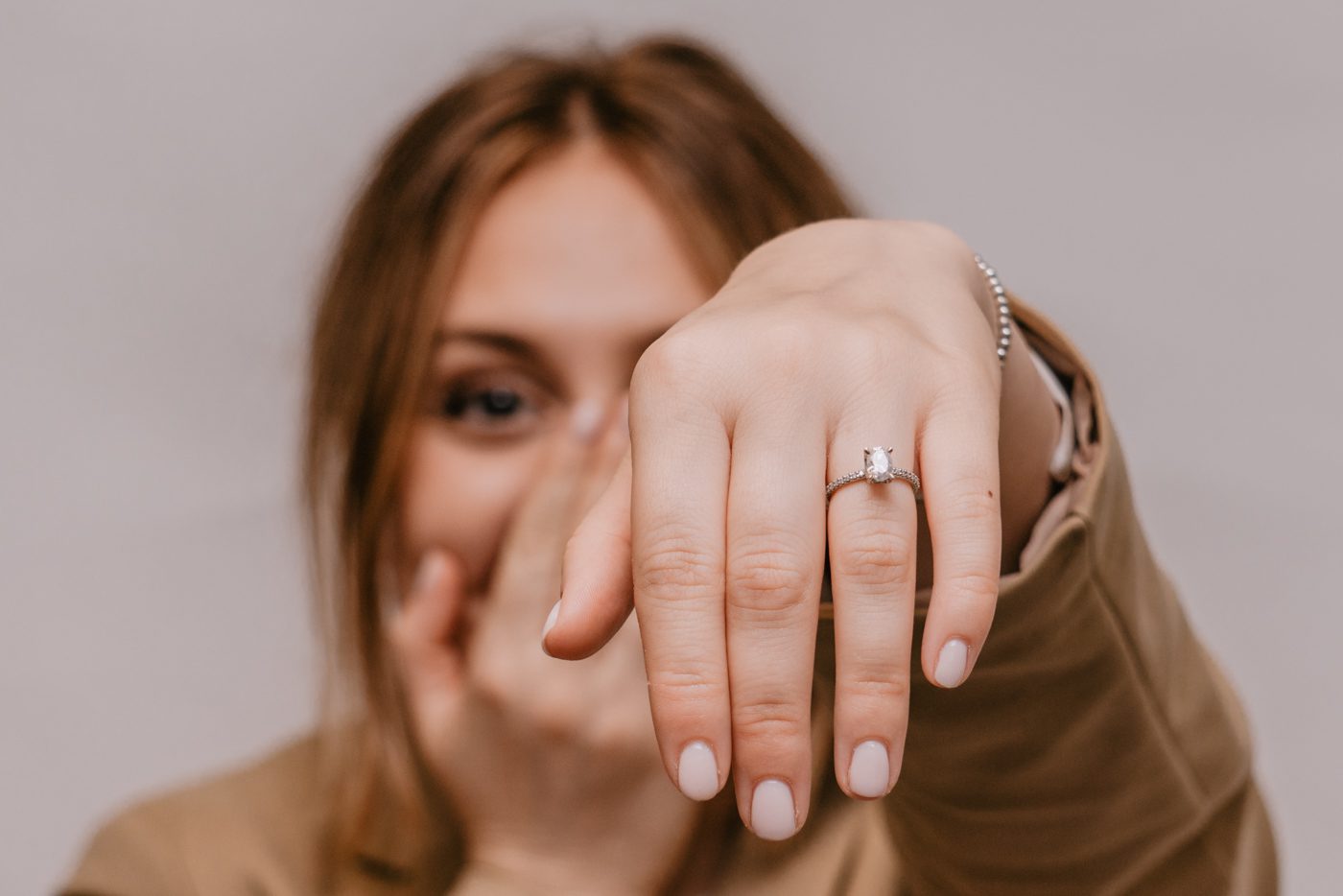 We have recently had some VERY exciting news amongst the Ethica Diamonds family, our very own photographer and website manager, Abi, has gotten engaged! Not only that, but she was proposed to with an Ethica Diamond ring and the WHOLE team were in on the secret! After a stressful few months of sneaking around behind Abi’s back, getting her ring sorted and trying our best to keep her none the wiser, Jake popped the question at their favourite place, Bedruthan Steps on September 4th 2021. Of course, Abi said yes and we could not be happier for her and her new fiancé Jake.

Abi joined our team back in November 2020 as our in house photographer and since then has become an integral part of the team, also taking on the role of website manager. A girl of many talents, Abi also runs her own freelance photography business on the side, Abigail Hobbs Photography . Jake is a chef and owner of  his own sauces, preserves and chutneys company, The Cornish Larder, which he founded with the help of Abi in 2018. These two are a force to be reckoned with! The pair met at Boardmasters festival in 2016, whilst Abi was living in Cornwall studying a degree in photography at Falmouth University. On the very last day of the festival, Abi and her two friends where struggling to pack up their 8 man tent which led them to call upon one of the girls mutual friends. This mutual friend just happened to be Jake! As the day progressed, Abi and Jake gravitated towards each other and ended up spending the whole evening together watching James Bay perform. At the end of the evening, Jake asked Abi on a date and the rest is history!

In the September 2017, Abi moved out of her university house share and into Jake’s parents house where she quickly became a part of the family. During their relationship the pair have had some amazing adventures together – Australia, Thailand, Bali ad Singapore being a few of the places they’ve travelled to! During the lockdown in 2020 they bought a yellow ford transit van which they fondly named Gino D’Campervan. The pair fully renovated Gino themselves, creating a beautiful home on wheels and the perfect way to explore whilst stuck in the UK. Fast forward to 2021 and the pair are embarking on their biggest adventure yet, becoming puppy parents to their beloved cockapoo Freddie, buying their first home together and getting engaged!

Jake planned to propose to Abi on a coastal walk with Freddie at their favourite Cornish location, Bedruthan Steps. With dramatic views of the stunning Cornish cliffs, Jake hired a secret photographer for the occasion, capturing the moment he got down on one knee. Knowing how important family and friends are to Abi, Jake planned the proposal date around when Abi’s mum Debbie would be staying with them. Whilst they were out on their walk, Debbie, Jake’s family and Abi’s closest friends set up a surprise engagement party to welcome the newly engaged couple home. They set up a buffet of food, a beautiful engagement cake, decorations and of course, bubbly! It was a complete shock to Abi when she realised the people closest to her weren’t picking up the phone to hear her amazing news because they were hiding in her garden! It was a magical afternoon of celebrations, cheers and lots of happy tears.

When it came to choosing the ring, Abi knew exactly what she wanted and had it made it very clear to us that if Jake ever came to us about an engagement ring, it was the Aesa ring she wanted. Since coming across it in December, Abi completely fell in love with the shoulder set solitaire. Aesa is simply stunning, very sparkly and one of our best selling rings. With a gorgeous oval central stone, it is extremely flattering on the hand. Being a very proud Taurus, Abi also wanted the setting changed to a twist, which she calls the ‘taurus setting’ as it resembles the star sign symbol. With a 1.0ct Ethica Diamond and the bespoke setting, this was Abi’s dream ring and is now the one she gets to wear on her finger for the rest of her life. Getting it to Jake undiscovered was no walk in the park though, as Abi is a top detective. The ring ended up staying with Abi’s colleague (and best friend!) Sophie, who hid it in her bedroom so there was no chance of her finding it at home. With the ring picked up by Jake the night before the proposal, everything was ready to go!

The pair have already begun talking about plans for their wedding, they have always said that they would love a festival themed wedding by the sea to represent when they met at Boardmasters. However, they are not planning on getting married until 2023 to give them time to enjoy being engaged and the wedding planning experience. Besides, self professed DIY queen Abi also has a LOT to get on with decorating their newly bought first home.

We can’t WAIT to see what Abi and Jake do for their big day and we have no doubt it will be as beautiful, creative and charming as they are. We are so delighted to have Abi as part of our team and it means so much to us that Jake chose to propose to her with an Ethica Diamond ring. To get to be a part of this special couples engagement is truly an honour.

Abi and Jake, we are so incredibly happy for you. See you at the wedding!