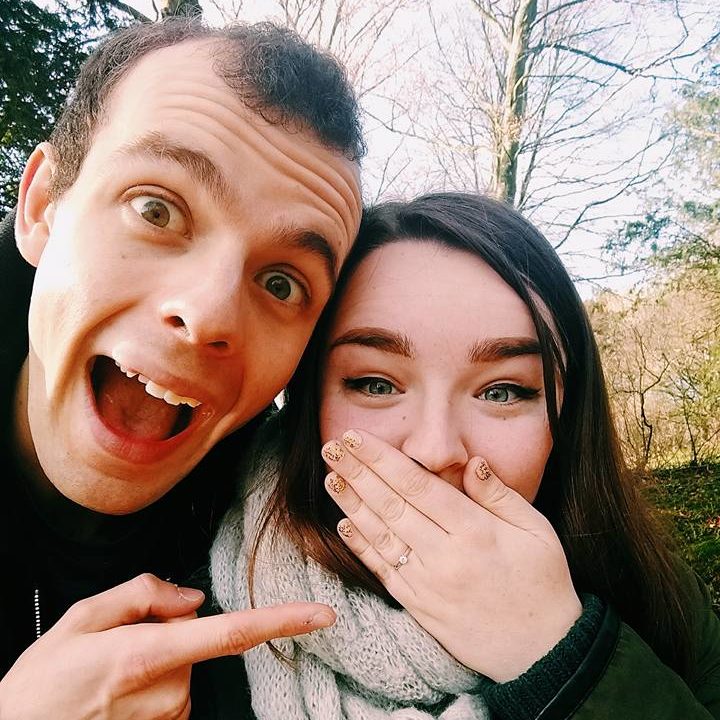 Once upon a time, there was a young man called Ben, who loved music, and animals, and had a silly sense of humour.  He hadn’t yet found anyone who shared those things with him, but then a friend introduced him to a young lady named Emily.  They began a tentative online correspondence, and eventually progressed to meeting in person, just the two of them, quickly realising that they had a lot in common.  Even Emily’s sense of humour was a match!

They began dating seriously, and had ‘adventures’ according to Ben, growing closer together as time went by. The pair had casually chatted about engagement rings, what Emily liked and what size she would need, but hadn’t seriously shopped for them together at any point. Emily apparently had no idea that Ben was thinking about proposing.  (We are suspicious that she might have had an inkling, after all, who casually drops their engagement ring size into conversation?)

Ben began researching engagement rings, browsing online whenever he could sneak onto the computer unobserved, looking at hundreds of different rings.  He’d decided early on that he wanted an ethically traded ring, and eventually went one step better, choosing our man made gemstone, which is ethically and environmentally in a different league to any mined diamond. It also appealed to Ben’s wallet, as our rings give you much more carat for your money than a mined diamond. He says Ethica Diamonds’ Valencia ring was the one he kept coming back to, and we know why.  It’s a lovely delicate ring, that shows off the diamond beautifully.

So, with the ring in his pocket, Ben was waiting for the perfect opportunity to pop the question. Christmas came and went, with Emily ill, and not able to go for any of the country walks that the couple enjoys.  Finally, on New Year’s Day, 2018, Emily felt well enough for a short walk in the grounds of Killerton House, near Exeter.  While they were enjoying the fresh air, Ben dropped to one knee and began to ask Emily to marry him, at which point she burst into tears!  We are assured these were happy tears, as she immediately followed up with a ‘yes!’

Emily was delighted with the ring, and says it’s better than she imagined her engagement ring could be (see – she was aware of what Ben had in mind!) and is delighted by how sparkly it is.  The couple are planning to marry in October, and we wish them both well. And they both lived happily ever after!