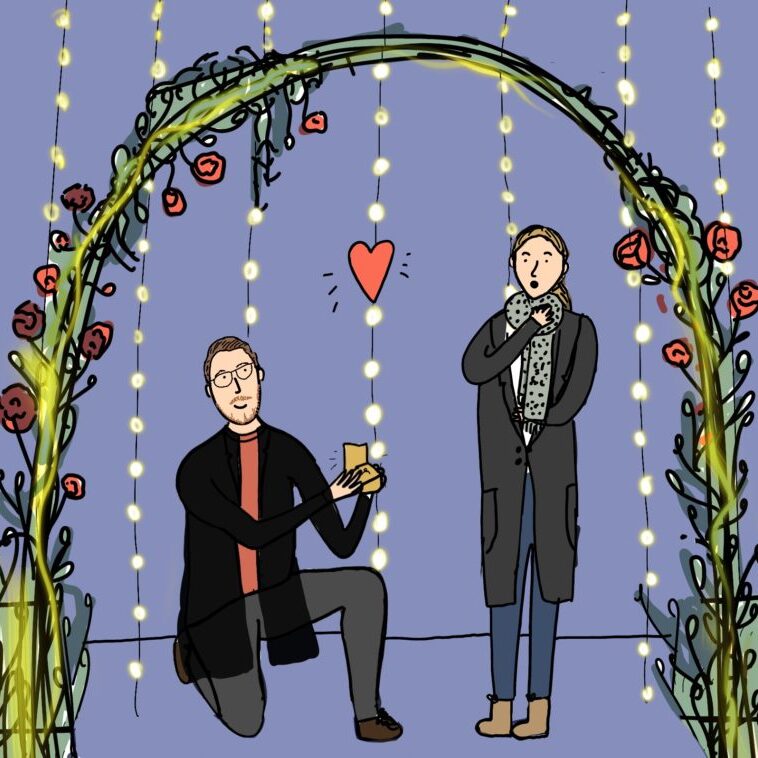 Luke and Hannah didn’t meet in the most romantic environment, as they first were introduced when Luke had to interview Hannah at Argos in Bath. Hannah was back from studying at University and her mum had rung up the store to try and get her a summer job. Safe to say, she got the job, as Luke fell for her as soon as he laid eyes on her! However, it wasn’t until Luke left Argos to pursue a different career that their romance began. Building up a friendship first, they spend lots of time getting to know each other and hanging out with mutual friends. Luke then went to visit her in Portsmouth and found the way to Hannah’s heart by taking her out for a pie, the rest is history! 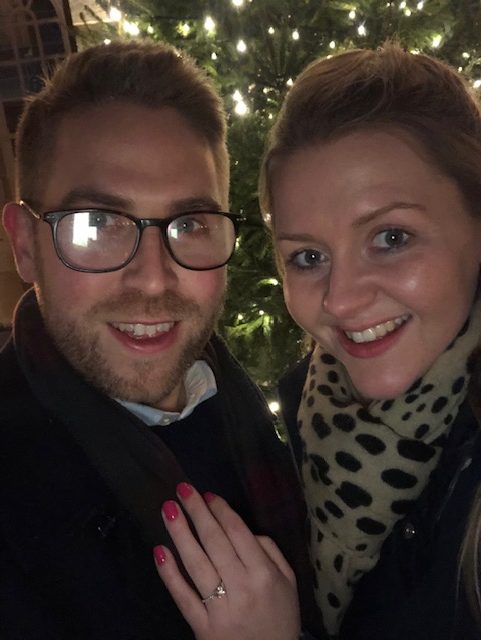 Since then they’ve had a wonderful and eventful eight years of doing life together. They’ve celebrated graduations, been on holidays, had job changes, bought a house and welcomed a little springer spaniel puppy into their family! Luke’s known he’s wanted to propose to Hannah for quite some time, but like so many others his plans were put on hold by lockdown. In late summer 2021, Luke got in touch with us, and the engagement plans began to become a reality! Christmas is Luke and Hannah’s favourite time of the year – the lights, wrapping up warm, cozy nights in and hot chocolate (with lots of baileys of course!) So it seemed only natural that Luke planned to propose to her during the most magical season of them all.

As far as we know, Hannah had no idea what Luke was planning, although she had definitely been dropping a few hints. Her and her friends had causally been tagging Luke in the Ethica Diamonds instagram stories (a fabulous way to drop a hint). Luke had his eye on the Estella ring, and once he knew Hannah was drawn to it too, he knew that was the one! The secret was very well kept, although Luke thinks he may have raised suspicions the night before the proposal. He suggested they should both wear something nice tomorrow so they could take a nice photo while on a day out, which is bound to get a girl thinking! Fortunately though, she was definitely surprised when he got down on one knee, so it seems Luke had nothing to worry about.

Luke found Ethica Diamonds through a recommendation from his sister and his fiance, who got engaged with one of our rings earlier in 2021. Hannah loved the ring, and the ethical and conflict free aspect really aligned with her views, so Luke knew he was on the right track. His first port of call was our website, which gave him a great initial amount of information, and allowed him to browse through our huge range of beautiful rings. Eager to know more, Luke reached out to our customer service team, who are always happy to support such an important purchase. Luke says ‘The Ethica team were so friendly, there was no pressure and my questions were all answered with the minimum of fuss-everyone couldn’t have been more helpful!’. The pressure of buying such an important ring can be incredibly overwhelming, and Luke describes his initial thoughts on the buying process as terrifying! Luckily, with the help of our team, he actually ended up enjoying himself, and ended up purchasing the stunning shoulder set Estella ring, which he had been drawn to from the start. He says “the Ethica team really put me at ease and I soon knew the differences between the ‘Ethica’ diamond and lab grown diamonds, as well as more detail around what to look for in terms of cut, clarity and color. It actually ended up being good fun!”

So with the ring sorted and knowing he wanted to propose at Christmas, Luke now needed to plan the details! He knew he wanted to do it somewhere that was special to the two of them as a couple and remembered that Hannah had loved when they visited the Christmas light trail at Blenheim Palace. With multiple romantic spots and a magical Christmas atmosphere, it was perfect. He booked tickets and an airbnb for the night and told Hannah to keep the 19th and 20th December free, how exciting! He visited Hannah’s parents a few weeks before to ask for her hand in marriage and of course they were absolutely delighted. Hannah’s mum even helped out with a cover story about wanting her nails done and convincing Hannah to get hers done too, so even her hands we’re proposal ready! Luke arranged for his parents to look after their 7 month puppy, so there was nothing to worry about now except asking the question and keeping the ring hidden from Hannah until the right moment! They arrived at Blenheim at twilight, just as it was getting dark and the lights were stunning. Luke found a private spot in the rose garden,all of the flowers we’re lit up and as Hannah was looking out across the garden, he got down on one knee and proposed. Hannah let out a nervous laugh as soon as she realized what Luke was doing, which threw him off what he was trying to say, but luckily the ring did most of the talking! Hannah yes and spent most of the rest of the trail ignoring the lights on cloud nine admiring her new engagement ring.

The happy couple have made a start on wedding planning, and are hoping for an autumnal wedding in October 2023, hopefully during half term to fit in with Hannah’s teaching schedule. They’ve been busy with spreadsheets, factoring in everything from bands and canapes to the first dance and wedding rings. There’s just so much to think about! Hannah loves the idea of having a wedding ring to perfectly match her Estella engagement ring, so hopefully we will be welcoming the pair back into our showroom soon. They’ve also been talking about the most important aspect of the wedding, the honeymoon! Adventure is high on the list of priorities but  you can also  expect to find Hannah and Luke honeymooning somewhere with clear blue sea and warm white sand. It’s such an exciting time for the two of them, and we’re so glad we could be part of the journey! Many congratulations from all of us here at the Ethica Team x