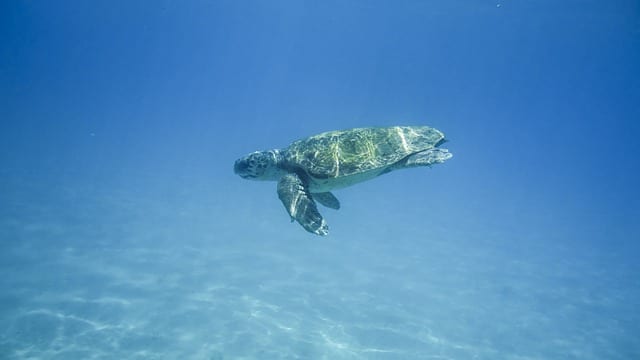 Think Diamonds from Namibia are Ethical?

We love watching all the nature documentaries about marine life, and it got us thinking – protecting our marine environment is just as important as protecting the land, possibly even more so. Unfortunately, others don’t share our views, so we’re looking in this series at the rise in, and damage caused by marine diamond mining. Part 1 of the series can be found here.

Undersea diamond mining is carried out by a marine crawler, sucking sediment from the sea floor and pumping it up to a processing ship where is its crushed, and the diamonds are extracted. It is clear that there are some significant impacts of this process on the areas which are being mined. 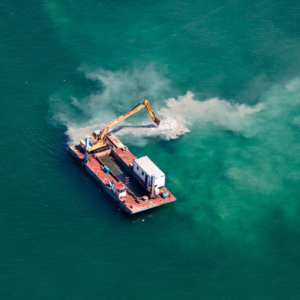 Firstly, there are reports of marine life including fish and octopuses, being sucked up in the pumps. Apparently they are returned to the sea and swim away afterwards, but just because a creature is seen to be spat out intact from the pipe doesn’t mean it is unharmed.  What if the place where the fish is returned to the sea is a distance away from its own territory, and it falls foul of a predator attempting to return home? What about feeding grounds, mating grounds, optimum conditions for eggs to hatch, food for young?

Of course, it is obvious that the entire seabed is destroyed by the extraction of the sediment. This is the top layer in which eggs are buried, it contains corals (although not in this particular location off Namibia) and other slow-growing, or slow-moving marine life, as well as seaweed and sea grasses. When the sediment is returned to the sea, it is simply pumped from the ships, falling like rain below the waves. Anything larger than a diamond will have been crushed, so this plume of fine particles decreases visibility across the entire area, as it settles like a blanket, and reduces water quality for the marine life above which it is jettisoned.

In addition, what about the lives of those who depend on the sea for their incomes? Whether fishing on a large-scale, small-scale or at subsistence level, all fishermen require a healthy marine environment for their catch to thrive, and will be negatively impacted if the seabed is destroyed, causing their fish to move elsewhere to find their food. 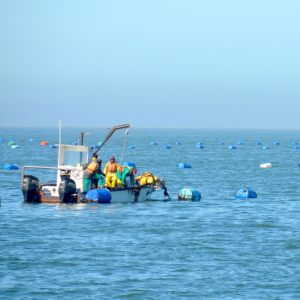 There has been little study on the impact of under-sea mining, as it is such a new area. The long-term impacts cannot be gauged at present, as not enough time has passed. In Namibia, the government has passed legislation to protect the under-sea environment, so that only minimal impact is made on the landscape and inhabitants. There are environmental reports from De Beers’ experts stating that only a small impact is made as the rover covers such a small percentage of the area, and marine habitats regenerate very quickly.

All of this is somewhat disingenuous. Right now, yes, only a small number of ships are sending a small number of rovers across a very large tract of sea floor, but De Beers themselves say that this is a growing area for them, and they’re not the only players in this market. In years to come, it is not hard to envisage fleets of diamond mining ships systematically criss-crossing the most promising-looking stretches of sea bed, laying waste to everything in sight.  It’s not possible to say how quickly the sea bed will return to its former state, as they’ve not been mining long enough to have a long term view on that – and De Beers have just signed a 50-year contract to continue mining in this area.

And as for the Namibia government’s legislation, is there really a strong incentive to protect the environment, when the country itself is a 50% owner of the mining company, and diamonds are the largest export, and richest source of tax for the nation?

Interestingly, the entire northern half of the coastline of Namibia, the Skeleton Coast, is protected by a huge National Park. The southern half of the coastline has National Park status as well, and 25% of the coast is protected to a distance of 30km seaward. Work is underway to have the entire coast of Namibia designated a World Heritage Site, because of its unique wildlife and ecology. What is so significantly different between the river outfall area which is being mined, and the protected area just a few miles north? 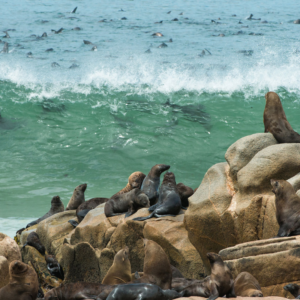 For truly environmentally sound diamonds, you cannot look at naturally formed diamonds any more, however or wherever they were extracted. The only truly eco-friendly, and ethical, diamonds are man-made. At Ethica Diamonds, we believe we have some of the best lab-grown diamonds and gemstones you will find.  If your precious gems come with a price-tag that includes destruction of the oceans, is that something you’re willing to pay?