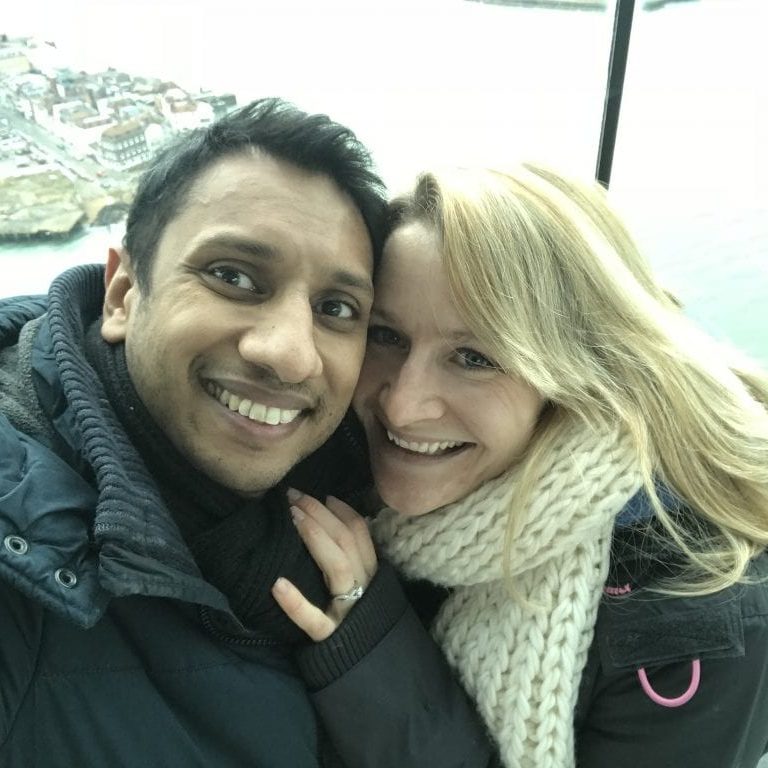 Richard and Emma met at the local gym.  He noticed her, but doesn’t think she noticed him, not in the beginning at least.  Richard had not long joined the gym, as he’d just moved to the area, so he signed up to take part in a team Spartan Race to get to know new people. This included Emma.  They spent the day of the race getting muddy and, over the course of the 8 miles and 25 obstacles, getting to know each other too. After the race, Richard ever-so-subtly asked Emma if she could show him some good places to run in the local area, seeing as he was new.  Emma’s mum, being a smart cookie, saw straight through this, but Emma said no, he was just being friendly.  Little did she know!

Fast forward a month and Emma’s mum was proved right! They took it slowly initially, with lots of trips to various parks as Richard began to get to know Emma’s young son. One day, as her son likes to remember it, he ‘chose’ Daddy and asked his mum if they could have Richard round for dinner – and the two boys have been conspiring against her ever since! 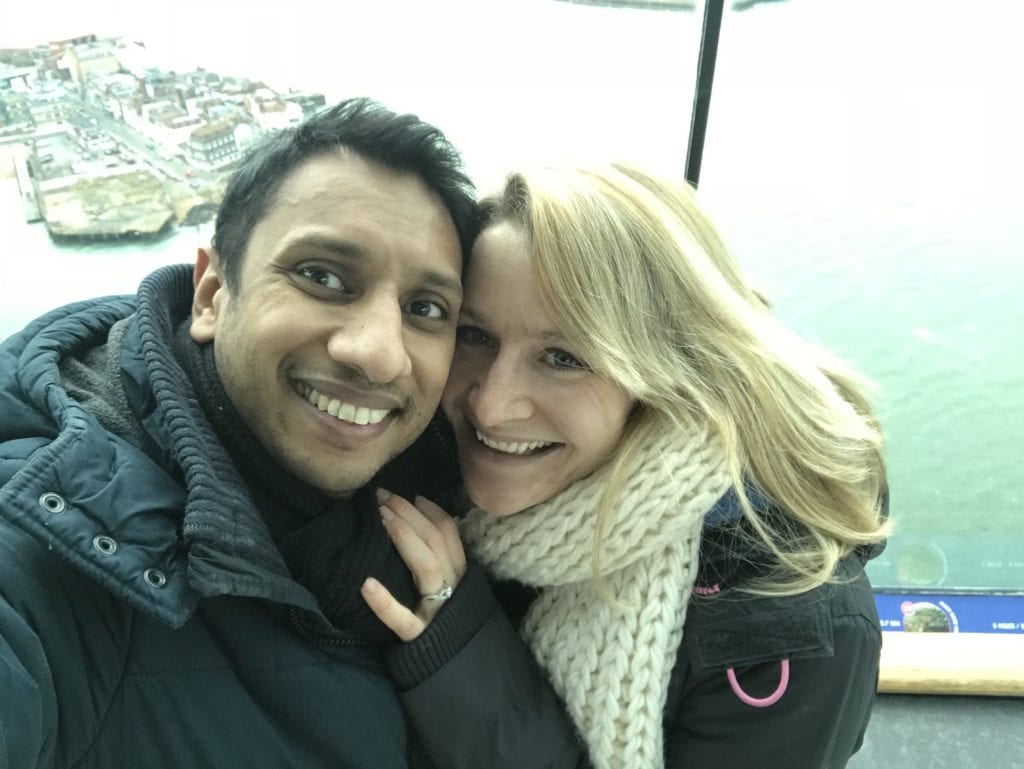 By the following summer, Richard had to go to America for a business trip, and invited Emma to go with him.  She was a little unsure about asking her parents to look after her son for a whole week, so Richard took her Mum for coffee to the nearby Garden Centre to ask her if that would be OK.  Of course, Nanny was happy to look after the little one, but poor Richard was teased mercilessly from then on about when he’d be taking Emma’s Dad to the Garden Centre for a serious chat.

However, it was on Richard’s mind to do just that.  He explains ‘we’re both in our thirties, and we’ve both had serious relationships, so we both knew this was it.’ He describes Emma as the dream girl you imagine yourself marrying when you’re at school, and is clearly besotted with both her and her son.

Richard started to think about proposing after their week in the States, roughly a year after they met.  He knew Emma wasn’t an ostentatious kind of person, and a proposal in public would really not be her thing.  Nothing too elaborate, something private … and what sort of ring should he get her?

Richard’s brother, Matthew, is half of the very first couple featured in Ethica Diamonds’ series of customer stories and, naturally, the brothers talked.  Matthew couldn’t be happier with the service, and the ring, from Ethica Diamonds, so Richard came to us too.  Emma doesn’t really wear jewellery, so Richard was completely in the dark when it came to choosing a style to suit her.  After subtle questioning, and even a visit to a jeweller to find out what size she needed, he managed to put together an idea of what he was after – not too showy, nothing impractical that would catch on everything and a milieu of smaller diamonds as well as the central stone.  With that to go on, Richard worked with us to design a bespoke engagement and wedding ring pair, using a large central stone and a woven eternity-ring design, inlaid with smaller diamonds. 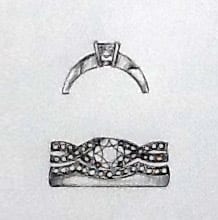 We think it’s beautiful and, thankfully, so does Emma!

So to the proposal.

Firstly, Richard did indeed take his future father-in-law for coffee at the Garden Centre, and asked formally for Emma’s hand.  Then he put his plan into motion.  He had a jigsaw puzzle made up, with a simple picture and message, and, a couple of weeks before Christmas, began giving Emma a few pieces every day. He worked his way down the puzzle and finished by giving Emma the bottom line on Christmas morning, revealing the words ‘Will you marry me?’ 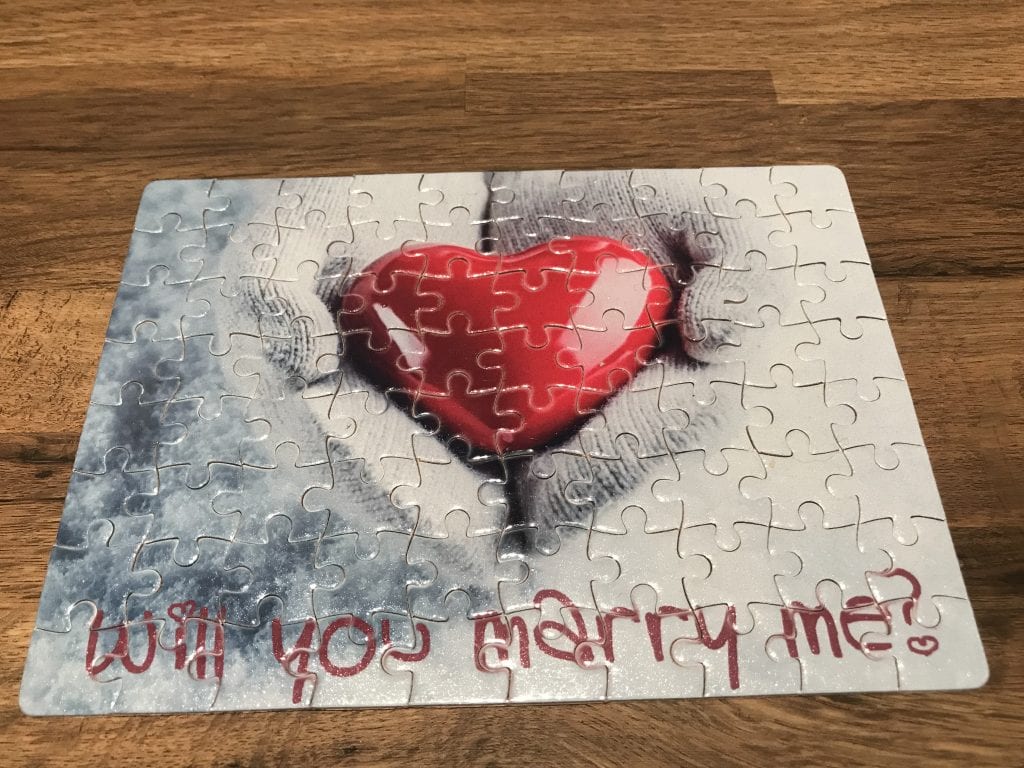 He got down on one knee to present her with the ring and she was delighted to accept. They even got the seal of approval from their ‘matchmaking’ son, who got excited about how ‘shiny’ the ring is before getting back to the important business of ripping open the wrapping on his own presents! 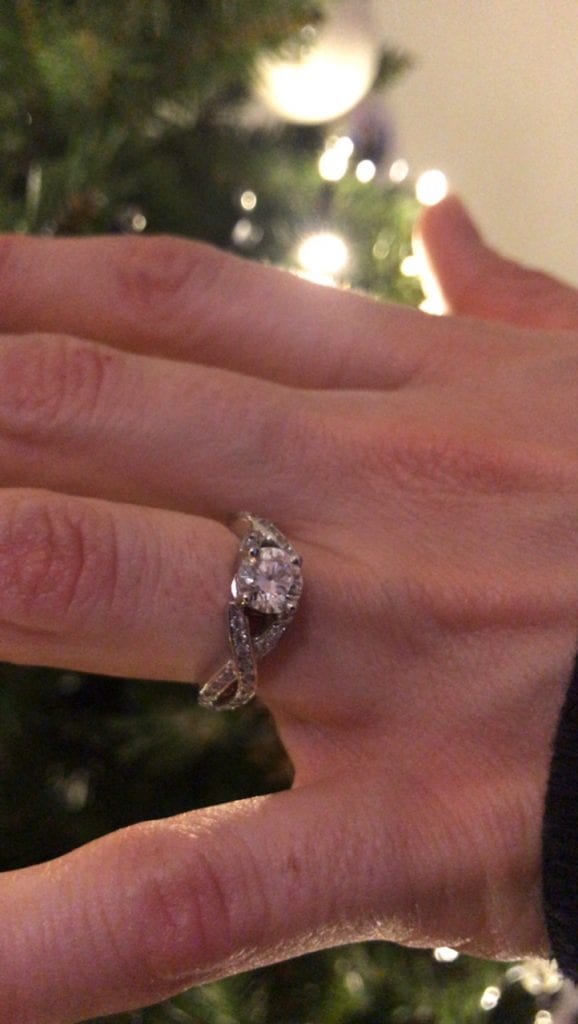 Now, despite not being used to wearing jewellery, Emma says her hand feels strange without her ring on, and she is delighted with the design for both the engagement and wedding rings. Richard will have to place the order to have the wedding ring made soon, as the pair have set a date in December 2018.

Richard says, ‘I know it seems quick, but it’s not, not really.  Sometimes you just know.’