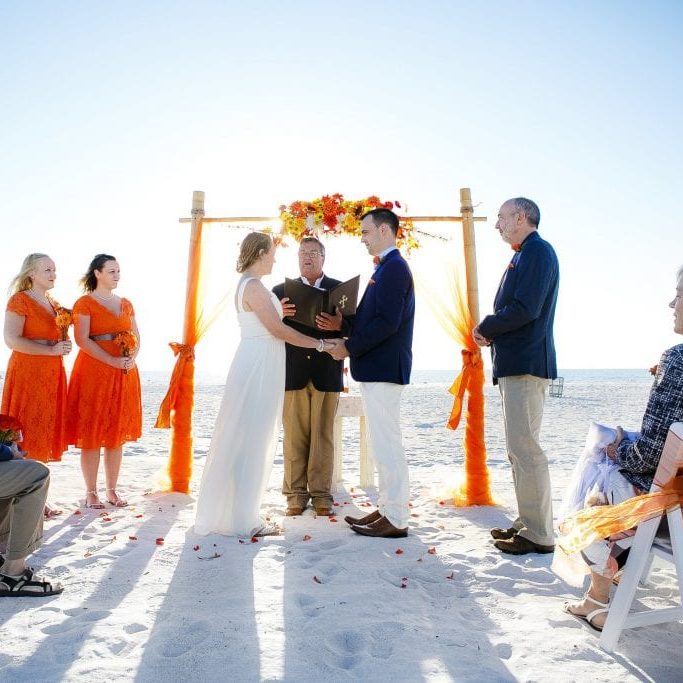 Simon and Nikki – fastest engagement ever! 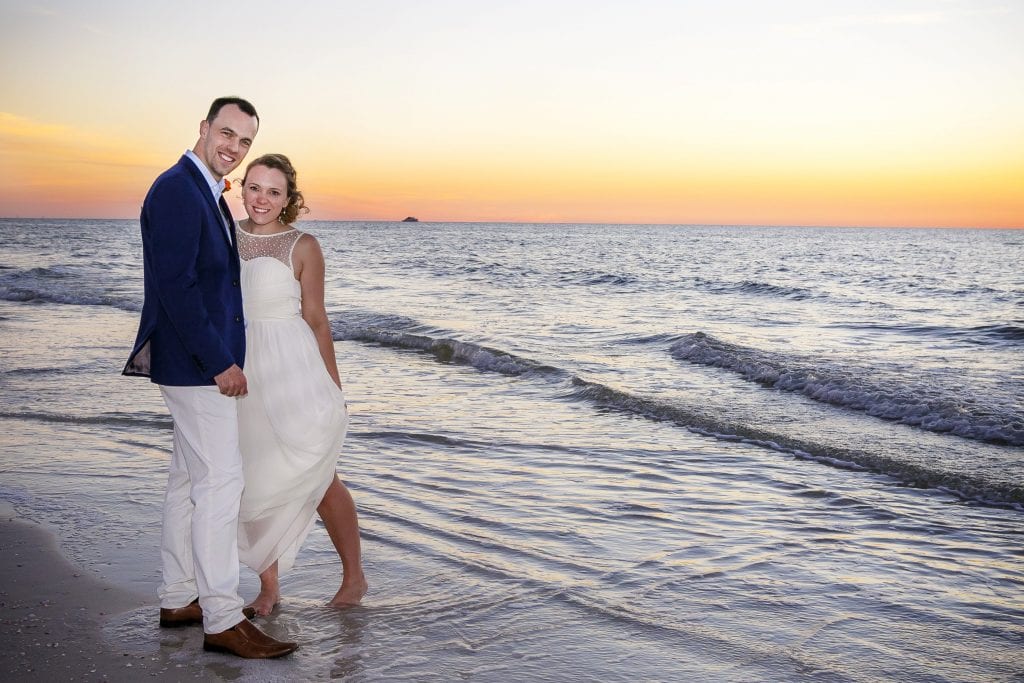 Simon and Nikki had one of the shortest engagements that we have ever heard of, with less than a week between Simon officially asking Nikki, and presenting a ring, and exchanging vows (and more rings, naturally). There’s a perfectly good reason for it, but it’s a long story, so settle in with your cuppa…

Let’s start at the beginning.

Simon and Nikki initially connected online, exchanging messages before meeting in person, but it only took a few dates before they both realised ‘this is it’. That was in May 2014.

Nikki was renting a house in Merthyr, and Simon had a home near Cardiff and by the end of the summer Nikki had more or less moved into Simon’s house. Simon recalls telling Nikki about a colleague who had proposed within three months of starting dating.  Nikki’s reply was ‘well, three months is the start of term, and I’ll be busy then, so you’d better leave it a little longer’.  Consequently, she was more or less waiting for Simon to propose from October 2014, although he took a little longer than that.

Over the course of the next three years, the pair bought a house together, a big house, with the ultimate aim of having a family.  They talked about marriage, and considered eloping, but didn’t quite get around to doing anything about it.  Nikki’s family own a holiday home in Clearwater, Florida, and they went there on holiday, once together, and once just Simon and his dad, as Nikki was unfortunately hit by an Estyn inspection (Welsh Ofsted), and couldn’t go.

Then, in the summer of 2017, a plan was concocted to go to Florida again, in October.  This time, the group was going to be Simon and Nikki, with Simon’s parents, who suggested Nikki’s parents be part of the gathering too.

Nikki texted Simon to say ‘I totally think that we should get married ;)’, and Simon replied ‘me too!’ So – proposal number 1, prize for the least romantic! Nikki’s two conditions for getting married in Florida were 1) a proper engagement ring and proposal, and 2) a party back in the UK afterwards with all their friends, which Simon happily agreed to.

Therefore Simon bought a suit, arrangements were made for licenses, officiant and everything else for Florida, and Nikki embarked on a mission to find a wedding dress suitable for a beach wedding in 90% humidity and 35-40 degree heat. Not an easy task! 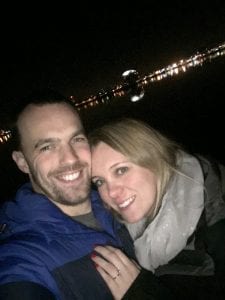 Nikki’s condition number 1 was playing on Simon’s mind.  He has a longstanding dislike of the mined diamond industry, and is aware that their claims to be ‘ethically sourced’ are not necessarily verifiable, and depend somewhat on your definition of ‘ethical’ in any case.  The look of diamonds, however, was something that both he and Nikki liked, so Simon investigated the man-made variety, finding Ethica Diamonds’ Lab Grown Gemstones.  Simon had seen a solitaire with a twisted claw setting, years previously, and Nikki had also liked that artistic styling, so that settled it. Between them, they narrowed the choice down, and Simon chose Eleos from the shortlist. Nikki explains, ‘it’s platinum, as I’m very accident prone, so it needs to be hard-wearing!’

Simon also ordered wedding rings from Ethica Diamonds, involving a blindfolded trying-on session for Nikki, to make sure the fit was correct, as it had to go perfectly around the Eleos ring, which is an unusual shape.

At this point, there hadn’t been a proper proposal, no-one else knew Nikki and Simon were planning to get married, and Nikki’s ring was hidden in Simon’s study, among the computer bits, where only the brave dare to tread… 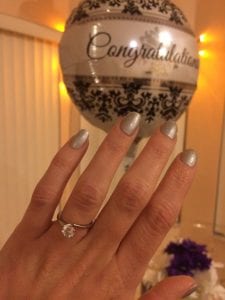 Simon was struggling to find a quiet moment to ask Nikki to marry him, without friends or family around.  It was actually the Wednesday before their Saturday flight to Florida, that the pair eventually managed to take a moonlit walk along the Cardiff Bay Barrage, and under the shelter there, Simon proposed, properly, and presented Nikki with her ring.  He explains that it was rather quick, because it was so cold.  She was, naturally, delighted.

Complicated plans had been concocted to assemble everyone, including now Nikki’s sisters, at the airport before all flying out together. After hiding the sisters, who were in on the surprise, and part of the secret, Simon and Nikki gathered their parents round a table in Gatwick Airport’s Weatherspoon’s, and announced ‘we’ve got something to tell you’. After much squeaking over the ring, wedding invitations were presented, and more squeaking erupted when it was realised that the date was just the following Tuesday!

At this point Nikki’s sisters came out of hiding, surprising her parents just a little bit further, phone calls were made to a few other family members, and everyone then had to rush to catch the plane.
Having obtained tickets to an American Football match on Sunday, Monday was free for shopping (smart jackets for the dads, flowers, dresses for the mums and bridesmaids), before the ceremony on Tuesday.

The photos go some way to capturing the beauty of the day, with the beach, the sunset, the rings, the flowers, and of course the gorgeous bride, and the finishing touch of a sand ceremony, where white sand from the beach is poured by the two of them into a heart-shaped bottle, to remind Simon and Nikki of their special day.

While the photographs were being taken, a local approached them, to let them know that there had been dolphins swimming past very close to the shore, which is rare – and considered to be a symbol of good luck.

Back in the UK, Simon and Nikki are happily settled into married life. Simon says it’s not that different, and he’s perfectly happy with that.  The big party that was Nikki’s second condition will take place around their first anniversary, and include a renewal of vows, with as many family and friends as they can cram into the building.

We wish them all the best, and would like to toast to a long and peaceful marriage, to offset the short and manically rushed engagement! 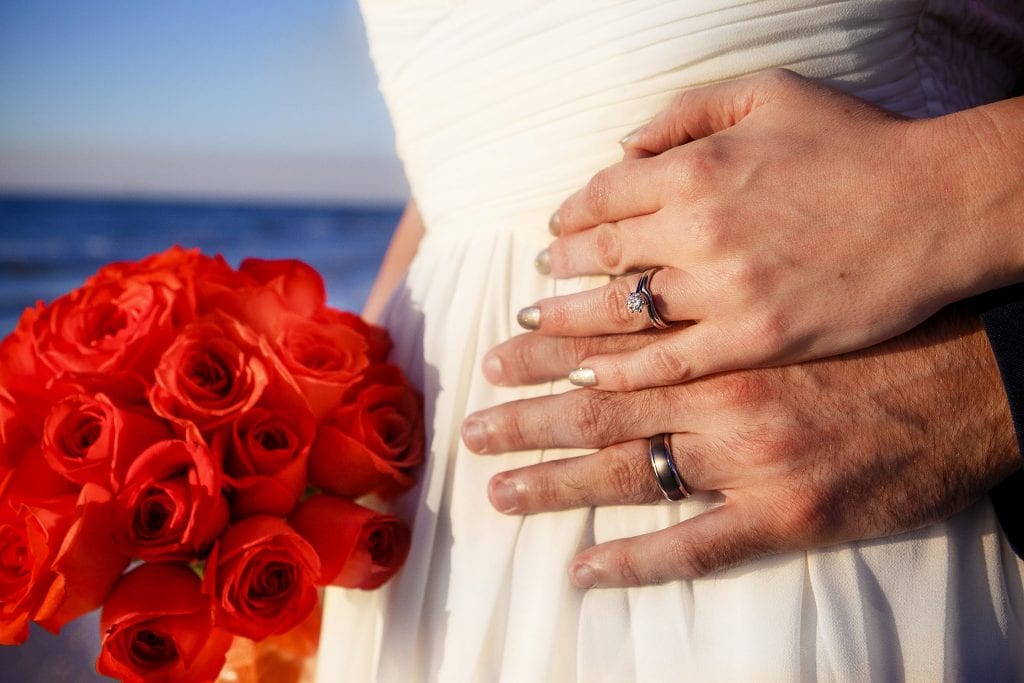