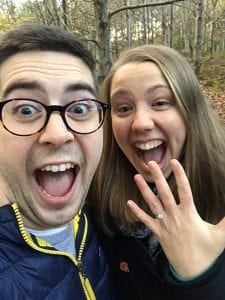 Tom and Sophie met at University, studying the same course, playing on University sports teams, and hanging out in a larger group of friends. For their first date they went to see a fireworks display on Gloucester Quays, on November 5th. (Remember that date, you’ll be seeing it again!)

Their relationship progressed throughout their time at university, overcoming some hurdles along the way, as every good relationship does, and they both then moved to study for Masters degrees at St Mary’s University, based in Twickenham. They made a point to celebrate their anniversaries as a couple by watching fireworks displays, including Blackheath, Alexandra Palace, and from a rooftop overlooking the whole of London.

Sophie is originally from Leicester, but after her Masters course finished she moved to Kent, to be nearer to Tom, who had moved back home after his course. Living in Sevenoaks, the pair started to put down roots, finding work, settling in a church, making friends, and exploring the beautiful Kent countryside.

Tom, meanwhile, had been eyeing up engagement rings. He knew Sophie was the girl for him, but she’d been rather vague on the subject of rings, so he was left to his own devices. He spotted the Ethica Diamonds Irene ring (below), in 2016, and had been drawn to it, with its elegant shoulder setting, and delicate clasp. He shopped around, even venturing to London’s prestigious jewellery quarter, Hatton Garden, but found nothing to compare to the platinum Irene ring. He admits cost was a big factor, but taking into account the look and feel of the Ethica Diamonds Lab-Grown stone, he says “made the decision-making very simple!”

Four ribbons of precious metal gracefully intertwine and embrace the centre gemstone, secured within a romantic split claw setting, in our stunning Irene Round Engagement Ring.

Having decided on the ring in October 2017, after over a year of thinking about it, Tom then realised that November 5th would be the perfect time to propose, with it being their fifth anniversary this year. So he had to get his skates on… He placed a rush-order with us, and his mother signed for the ring, while Tom was out at work. He had to hide both the ring and his excitement for two days, until the 5th, and then get Sophie to the right place for the perfect proposal, without her getting suspicious.

That last part didn’t quite work as she was a little confused about why he needed to bring a bag with him to go for a short walk in the countryside – she’s a smart girl!

However, walking in Knole Park, near Sevenoaks, Tom presented Sophie with a photo memory book of the two of them – ‘The Dream Team since 2012’.

He wouldn’t let her get to the last page until he’d arranged his camera on a nearby tree, and dropped to one knee, so as she read the final page, he was able to propose.

I think it’s safe to say that Sophie was delighted, both with the proposal, and the ring!

The pair celebrated with Champagne, and sparklers, being November 5th of course!

Tom says he couldn’t be happier with the ring and wouldn’t hesitate to buy from Ethica Diamonds again, although he’s not in the market for another engagement ring! And Sophie’s smile speaks for itself.

Tom says, “During our five years together, our love, friendship and happiness have continued to grow each and every day and now, being engaged, the opportunities to grow as a couple have massively increased and we are both super excited for the future!”