WANT TO TRY ON SAMPLES FROM THE COMFORT OF YOUR OWN HOME? CLICK HERE!

As part of our ongoing series on the true cost of mined diamonds, we’re looking at the impact that diamond mining has on the water in the local area.

It’s clear that digging a large hole in the ground is going to cause a good deal of disruption to the surrounding area, with waste materials being a major contributing factor.  However, impact on the water in the local area is less obvious.

In Sub-Saharan Africa, water pollution as a result of mining is a big issue, as useable water is not easy to find.  Minerals containing sulphides, which aren’t normally exposed to the air, oxidise to form sulphuric acid, which seeps into the groundwater.

Heaps of waste rocks are often dumped into lakes and water sources, even in Canada, which prides itself on its environmental record around mining.  It was proposed in 2012 to expand the Canadian Metal Mining Effluent Regulations to include Diamond and Coal mines within 2 years.  However good this sounds, there exists Schedule 2 in that regulation which allows any natural water body to be designated a ‘tailings impoundment area’.  Therefore a perfectly good, eco-rich lake can have its designation changed, and thus not be a lake any more, meaning the wildlife in it isn’t protected by any legislation relating to lakes, and you can dump whatever you want into it! 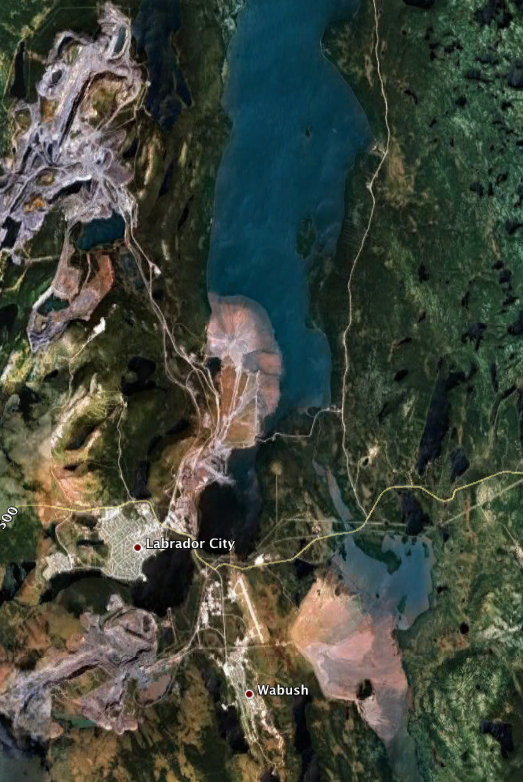 Two lakes now designated tailings impoundment areas for iron ore, in Canada. You can see the discolouration of the water, creeping further into the pristine blue.

Often a mine will extend below the water table, and require continuous pumping to allow mining operations to take place.  This water is usually piped back into the local river system, below the mine, and simply flows away, together with any waste water from the mining process itself.  The water that’s pumped into the river could well be poisoned with a range of substances, including sewage, detergents, metals such as zinc, lead, mercury and arsenic, and perhaps heavy metals. Communities and wildlife living downstream of mining operations are suffering skin conditions, digestive complaints and in some cases death, as a result. There is particularly evidence of this in areas such as Zimbabwe, where there is a well-documented disregard for human rights and environmental issues.

While this level of pollution is clearly going to have an impact, even low-level pollutions, such as an increase in silt, or a subtle change to the pH balance of the water, will change the conditions for the minute water-life on which the eco-system depends.  If that is wiped out, the entire food chain is compromised, even in areas where care is being taken to reduce impact.

A final factor in the water story around mining, is related to the people involved.  Where a workforce is imported to a previously un-populated area, their water consumption as human beings is greater than the area had previously been supporting, and their waste treatment requirements also. Taking water from the local water sources is detrimental to the local wildlife, reducing the water available to them, or causing what is called ‘fragmentation’.  Lower water levels mean that previously linked pools become isolated, reducing the genetic diversity available within species, and raising susceptibility to disease.

A final point, with relation to water and the local population – after a mine has closed, the abandoned pits usually fill with water.  In Sierra Leone in particular, this has caused a major problem, with the stagnant water becoming a breeding ground for malaria-carrying mosquitoes and effectively causing an epidemic.

In subsequent blogs we will be looking more at the impact mining has on ecosystems and wildlife.  An enormous hole in the centre of your traditional migration route is going to be a headache, whatever species you are!  The final subject area will be the human impact of mining.  The Kimberley Process was intended to remove so-called blood diamonds from the international markets, but it doesn’t have any remit over diamonds mined under conditions of human suffering when they are carried out under the sanction of the government of that country.

For further blogs in this series, see Wildlife, with others to follow about the human cost of diamonds – part 1 and part 2.