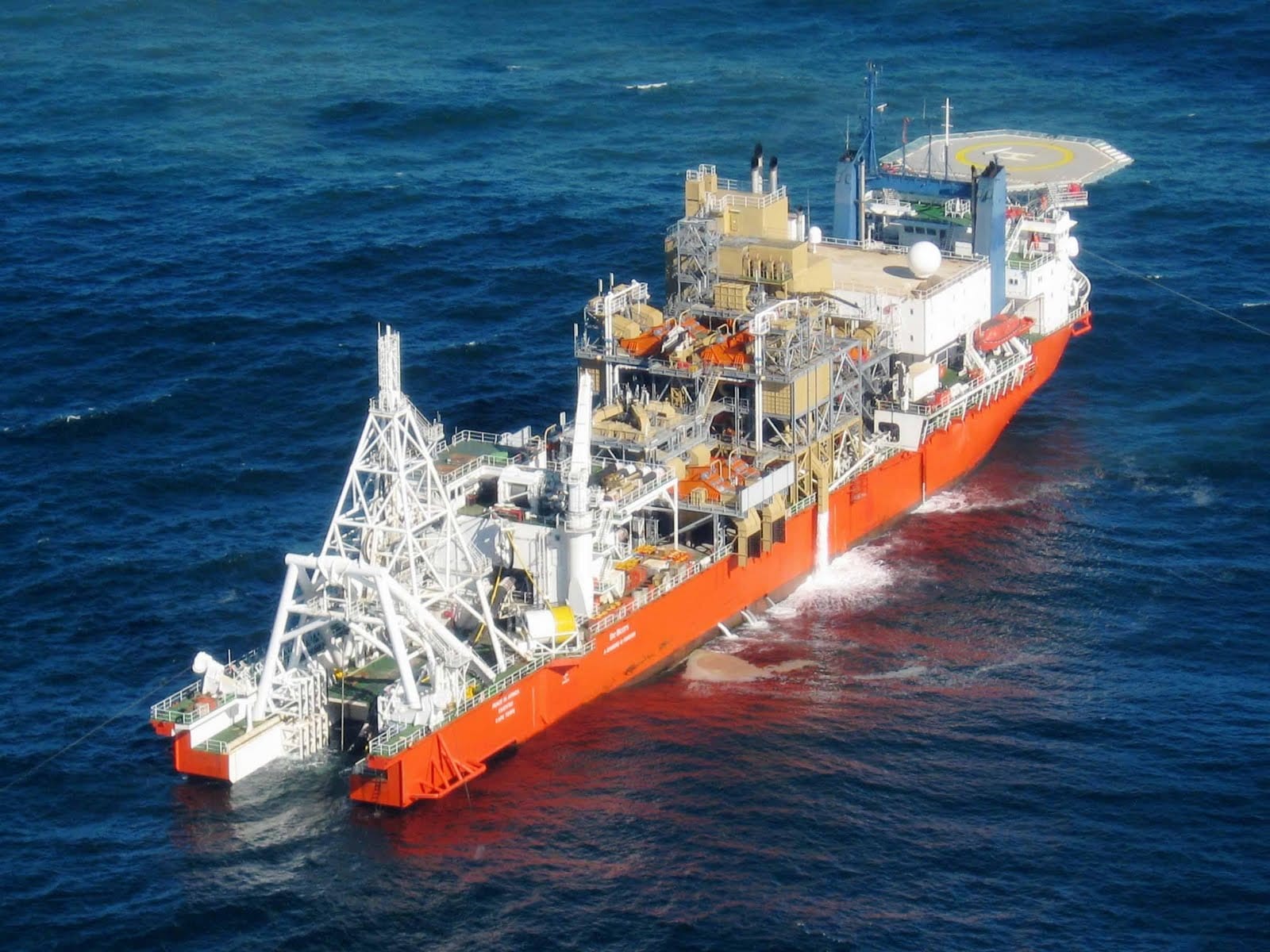 Undersea diamond mining – worried yet?  You will be!

If your job is to collect a thing, and where you usually look for that thing is starting to look a bit scarce, then you start to look somewhere else – that’s just common sense, isn’t it. And you look for a place where there is a lot of that thing to be found. Well, yes, you do.

That’s the logic being used by a company called Debmarine, a joint venture by De Beers, the diamond mining conglomerate, and the Namibian Government.  The new place that they are finding diamonds is off the coast of Namibia, where the Orange River has been depositing sediment for millennia.  Included within this are diamonds, washed downstream from the South African diamond fields, and re-buried under continual deposits of sand and gravel.  The diamonds that survive this journey are only those of the highest quality, making the undersea pickings very rich indeed – if you can get to them. 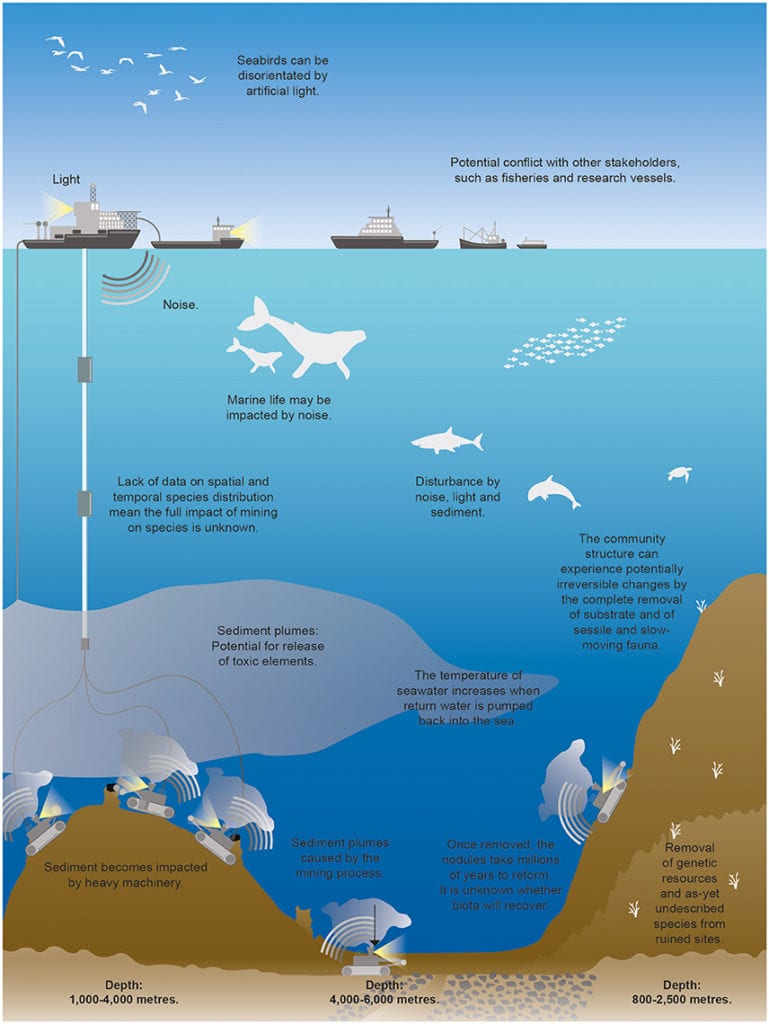 Shallow-water diamond mining (technically, it’s not really mining) has taken place for many years, as locals went out in boats and gathered what they could, but this industry is in chaos as the businesses have been bought out and allowed to disintegrate.  There is no rich diamond quarter along the coast of Namibia, as you might expect, but poverty and unemployment.  But that’s a story for another time.

Deepwater mining, on the coastal plains, is an industrial operation, only possible with big investment, and very specialised ships and equipment.  Ships are fitted with undersea crawlers or drills, and giant suction nozzles, to gather up all the sediment, before extracting the diamonds, and dumping the rest.  ‘The rest’ in this instance being rocks, sand and marine life, and it is dumping.  There is no way that fish can be put back exactly where they came from, the sea floor returned to its pre-mined state, and ecosystems put back how they were.

Currently, Debmarine has six ships working an area of the seabed between 10 and 30 miles off the Skeleton Coast of Namibia, and another ship in the works.  They hold the rights to mine an area of 2,316 square miles, of which they have worked 50 square miles since production began in 2002.  This is just 2% of the licensed area so far, and 27% of the total has been found to contain diamonds, so they have plenty more to work with before their current license expires in 2035. 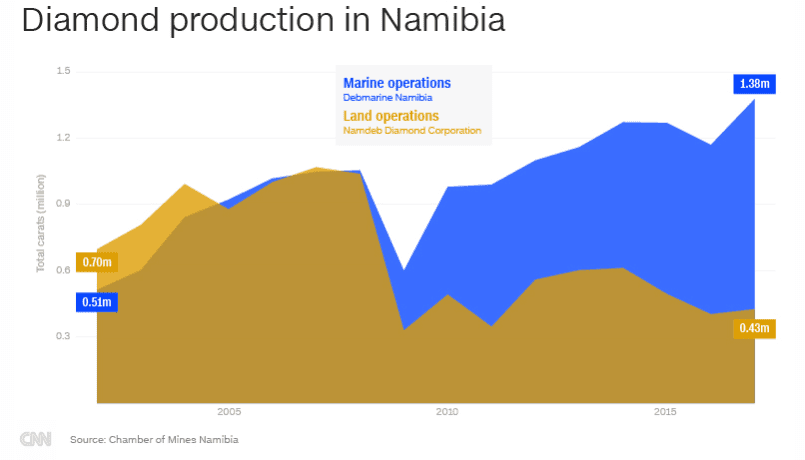 Chart showing diamond production in Namibia, and how undersea mining has taken over land mines

Scientists have expressed grave concerns over undersea mining operations, both this and others that are proposed, because so little is known about the seas around our planet.

There is so much that is unexplored, and untold numbers of species that are not yet known to science.  There is no way of gauging the impact of mining activities on ecosystems that we do not understand, and no timescale for how quickly these places can recover once mining operations have ceased – if indeed they will ever do so. We wrote more about undersea mining in our blogs Mining for undersea diamonds – part 1 and Mining for undersea diamonds part 2 a couple of years ago, if you want to read more.

There is another facet to undersea mining, taking you further out to sea, and into even more contentious waters.  Deep sea mining is being investigated, taking place in water over 3,000m deep.  The three principal areas for this are hydrothermal vents, cobalt rich crusts that form around volcanoes, and polymetallic nodules, which are metallic deposits that form around seed items, as a pearl does in an oyster.  All these are sources of metallic elements, such as gold, manganese, nickel, and cobalt, and are very interesting to those who wish to exploit these resources.

There is also the strong possibility that undersea diamond deposits will be found, for example in the Indian Ocean, and the Clarion-Clipperton Fracture Zone, between Hawai’i and Mexico.  However, these areas haven’t been explored or mapped properly, simply because of the vastness of the ocean, and the difficulty of getting to the seafloor to map it.  The likelihood is that there are diamonds, simply because the conditions that cause the formation of diamonds have occurred in these places, but no-one is sure.

A project called Seabed 2030 was launched in 2017 to map the entire ocean floor.  At present, between 5 and 15% of the ocean floor has been mapped, mainly in the major shipping lanes, and coastal waters, and excluding most of the deep oceans.  This project’s aim is noble: “to empower the world to make policy decisions, use the ocean sustainably and undertake scientific research based on detailed bathymetric information of the Earth’s seabed.” However, it is feared that the resulting map will be in effect a pirate’s treasure map, enabling industrial operations to take place in the richest areas, plundering their mineral resources.

This is an image of the Pacific Ocean floor, from the Seabed 2030 project.

The deep oceans are a very fragile environment, and while it is shocking to discover that man-made plastics have turned up in every water sample taken in a recent study, imagine the impact of mining activities!  A recent study has catalogued the potential areas for concern:

Taking care of our environment should be a global priority, and while that is apparently not the case in some countries, it is up to us, as individuals, to fight for, and shout about, the damage being done to our earth, and do what we can to protect it.

Refusing to purchase mined diamonds might not seem like much, but every small thing will add up, eventually.

De Beers’ version of how it works https://www.debeersgroup.com/the-group/about-debeers-group/mines/namibia/marine-mining

report into undersea mining operations – https://www.frontiersin.org/articles/10.3389/fmars.2017.00418/full – this is the source for the infographic.