By Soph30th August 2022No Comments

The story of how Yuddha and Conor met is one that they love to tell and laugh about with friends. They met at a night club called Bar 244 in Toronto in 2015 of November. It was a happy coincidence, as Yuddha is not a club goer and only went for a friend’s birthday and was sober that night.  Whereas Conor was a few months new to the city and went out during weekends with his mates, and was… maybe not so sober. Conor came up to Yuddha asking why she wasn’t dancing and then proceeded to ask her to dance — they ended up chatting and dancing the rest of the night away. Conor got Yuddha’s number by way of her best friend, as Yuddha left her phone in her car.

After a week, Conor texted Yuddha and they both got to know more of each other and hit it off pretty quickly. They then arranged to meet up on the weekend for the first time since that evening, and they walked around the city in the rain and talked about everything and anything. It was so effortless, easy going and comfortable being around one another and before you knew it, they saw each other every weekend after that and fell in love within the first month and a half.

Yuddha knew it was real when Conor surprised her with a trip to his hometown Northern Ireland for her birthday, eight months after meeting, where she got to visit his childhood home and family (whom she had met a month prior). It was a huge deal for both families to meet one another before going away to Northern Ireland, and as soon as they met each other, Yuddha and Conor felt everything was meant to be.

Fast forward to 6 and a half years later, they are engaged and preparing to move to London, England for the next few years!

Conor, when did you know you wanted to propose?

It’s hard for me to recall any exact moment when I knew I wanted to propose. I think as our relationship evolved and we moved in together during lockdown (which in my opinion is the ultimate test of a relationship!), I knew that she was the one I wanted to spend the rest of my life with. I started looking for a ring in February 2022 and planned to propose on our next trip outside of the country.

Conor, what made you consider an ethical stone rather than a mined diamond? How did you find Ethica? Online search, word of mouth? What made you choose the Evangeline ring?

Yuddha lives and breathes sustainability and being ethical in all aspects of her life. I knew it was absolutely essential to get her something that was made ethically and sustainably. I found Ethica through many online searches in my quest to find the perfect ring. I chose the Evangeline ring because it was the only one I saw where I didn’t second guess if she would like it and had absolutely no hesitation. Once I saw the Evangeline ring, I wasted no time and reached out to Ethica who were so helpful and accommodating, answering the many questions I had. 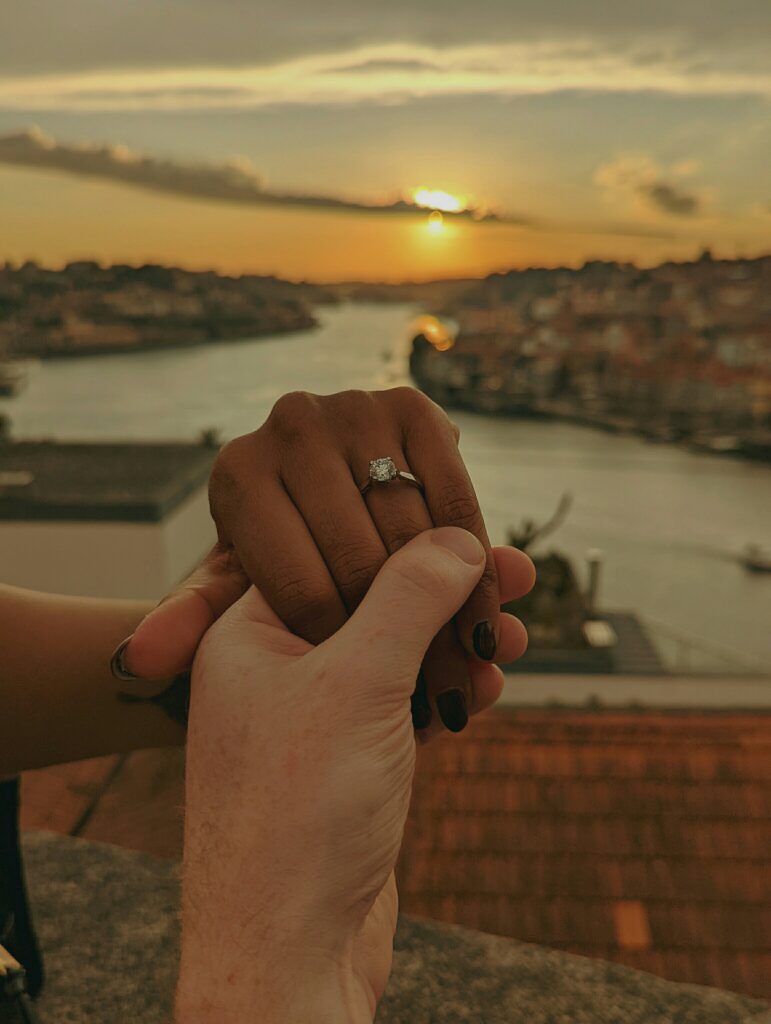 Proposal – give us all the details! How did you go about planning it? Where did it take place? Were there any family or friends there?

I’ve always wanted the proposal to be a surprise. Yuddha and I had a big adventure coming up in July and I thought it would be the perfect time to propose after being in lockdown for so long. I had the ring shipped to my parents house in Northern Ireland. This conveniently was the first stop on our trip. Our next destination was Portugal. I knew that Portugal was the place I wanted to propose but I did not have a set date/location to do so. I did this because I did not want to put a lot of pressure on everything going exactly as planned (because it never does!). I carried the ring around with me for a couple of days. One of the days in Porto we visited Mosteiro da Serra do Pilar. With a spectacular view over Porto – I thought this was the perfect location and proposed.

Yuddha – did you have a feeling it was going to happen or were you in total shock? What did you think when you saw the ring!?

I had absolutely zero idea of anything happening! Conor and I of course discussed marriage many times during our 6 years together, but never knew when we would get engaged.

We also never went ring shopping as it is a personal choice for us to leave it as a surprise and not plan it out too much—sometimes planning it all takes the fun out of it! I had no clue if he was even interested or shopping for rings, as I was always the one talking about them! In hindsight, I truly appreciate the thought and intention that went into it, and it makes it even more special to us (and it means he was definitely listening!).

I didn’t even pay attention to the ring until he showed me the box a few minutes later, as I was too flabbergasted and in shock and filled with tears! When I did see it, I couldn’t believe my eyes that it was an actual ring, if that makes sense! It’s quite surreal to see the ring your partner chooses when they ask you to marry them, and I was just so happy to even be given a ring. The ring was so beautiful and bigger than I expected and when he told me it was an ethically made lab grown diamond, it was even more beautiful to me.

The style of rings that I had liked were quite unique and different than the traditional ring, and when Conor told me the ethical and sustainable jewellery brands that I had fallen in love with were not transparent and held up to their ethics during his research, I instantly felt so grateful that he took that into consideration and did what was best for the both of us. This ring is incredibly special, and I thank Ethica Diamonds for making this possible!

Wedding plans are not in the making quite yet, apart from the fact that they are both set on having a castle venue in Ireland for the reception! They want their wedding to take place in both Ireland and Canada (their home countries). They are hoping to get married in 2024!  They don’t know when exactly, but are excited for when it happens! Whenever it happens, we know these two are going to have an incredible wedding, and will spend an incredible life together.

We’re so happy we got to be a part of Yuddha and Conor’s journey and provide Yuddha with the sustainable ring of her dreams! We want to wish this beautiful couple all the happiness in the world and a huge congratulations from everyone here at Team Ethica x