There has been news in the last year that De Beers is trialling the use of Bitcoin blockchain technology to help track diamonds from mine to jewellery customer, in an attempt to instil more trust in the industry, which is still suffering from the taint of ‘blood diamonds’.

It’s a very interesting innovation, for a couple of reasons, but first a brief primer on blockchain.

Blockchain is the technical wizardry behind Bitcoin, but it’s one of those things that people have heard of, but don’t actually know very much about.

Blockchain, in essence, is means of guaranteeing transactions.  It uses cryptography to encode data, that ensures that each transaction is recorded, and un-changeable. The data exists in a public forum, not on a single central database, but is continually updated, so that everything is immediately verifiable – I can prove you paid me, or not, for example.  Each transaction code is based on the previous one, so going back into the record and changing something would mean the subsequent codes were wrong, so hacking is immediately detectable. For Bitcoin, the entire database is publicly available.

De Beers are using it as a collaborative semi-private network, which partners are invited to access, along the entire route of processing a diamond.  Each rough diamond is allocated a code, and at every point on the line at which it changes hands, or is cut, or polished, or set, a transaction is logged, and the spreadsheet updated. That’s the simplified version, but they have been testing it, and it seems to work.

For De Beers to make it work for the industry as a whole, every legitimate diamond mine, every diamond cutting business, every half-way house process, every jeweller would need to buy into the scheme, logging every bitcoin blockchain transaction for every blood diamond. De Beers charge partner organisations to access the system, and people will probably sign up, simply because the alternative is that they won’t be able to deal with De Beers, who still have a major stake in the mined diamond industry, even if it’s not as significant as it used to be.  De Beers want having a Bitcoin Blockchain-verified diamond to become essential for consumers, when purchasing jewellery. 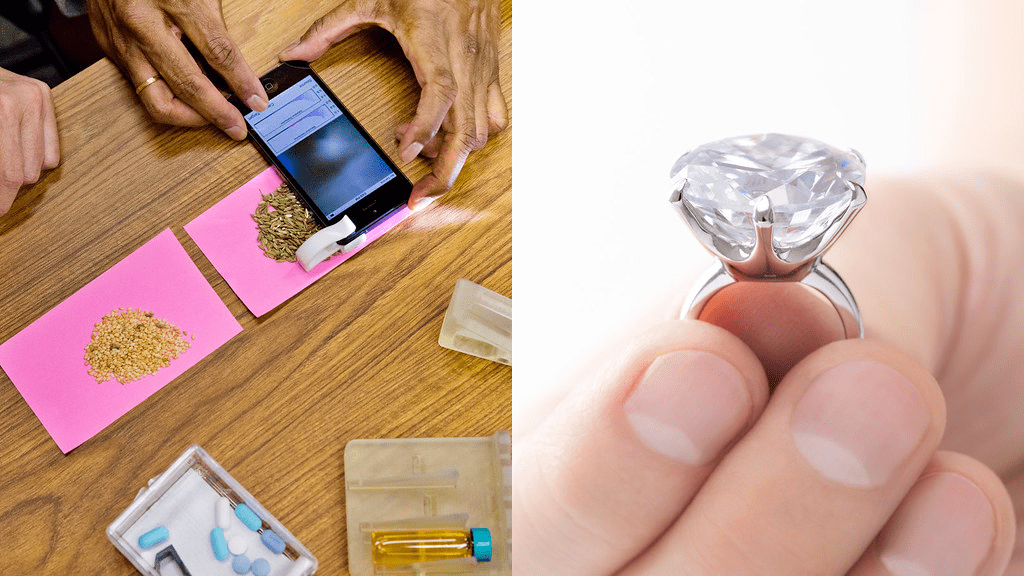 It could be argued that De Beers are coming close to running a protection racket here… ‘Pay up, or you won’t be able to trade’. They’ve already been fined for running a cartel, this century, so this is an interesting career move!

The other issue is the one that is carefully being ignored in all De Beers’ publicity on this: the fact that they feel the need to run this hugely complex scheme at all is because there are still conflict diamonds in the system, despite the Kimberley Process.

Introduced back in 2000, the Kimberley Process was set up “to ensure that diamond purchases were not financing violence by rebel movements and their allies seeking to undermine legitimate governments.”

All well and good, but certain practices are not covered by the Kimberley Process – the use of money obtained from diamonds to prop up legitimate but corrupt governments, diamonds mined under conditions of human rights abuses but where there isn’t a rebel group involved, tax fraud, and money laundering.

And there are loop holes as well: diamonds smuggled from non-compliant countries and passed off as certificated, and the inherent difficulties faced by a system that monitors rough diamonds which are sold in batches.

A founder member of the Kimberley Process scheme, human rights watchdog Global Witness, withdrew in 2011 because they felt that the scheme was fundamentally failing to stem the flow of blood diamonds into the market.

Even in the last couple of years, despite efforts to assure people that the KP is working, KP member the Central African Republic has been linked to diamond smuggling, and diamonds are mined still in KP member Zimbabwe under conditions of human rights abuses including torture and murder.  But because in these countries the mines are not linked to rebel groups, (indeed are secretly part-owned by the government in some cases, through shell companies), their diamonds are still happily accepted by the Kimberly Process.  This is why De Beers feels the need to add another layer of guarantee to their diamonds, because they know that no-one will really want to be purchasing diamonds that are drawn from these dubious sources. But they’re not publicising that part very much.

Once you’ve looked at the facts behind the headlines and buzzwords, it is clear (to us anyway) that the only way of guaranteeing ethical treatment of workers, fair pay, and no human rights abuses is to make the diamonds, which is what we support!

Read our previous blogs about the real cost of mined diamonds on people: